Last weekend I returned to North Carolina after almost three years of absence. It was the first time going back 'home' purely as a visitor - I no longer have the roots to this place which most who know me don't believe in the first place.

From the airport I picked up a rental, which turned out to be a Prius. Driving down the highway with open windows, there was soon the smell of organically fertilized fields and Alabama's old hit "Song of the South" came on the radio. I smiled to myself reveling in the very appropriate disjunction of the super digital hybrid car in this slow changing, fuel dependent place.

Many people have dispositions about the south and the slow, seemingly backwards lives people there lead. Looking back however, throughout this trip I came to understand how some aspects of North Carolina likely influenced me and have stayed with me through the years. First, I saw that NC is a truly beautiful and quite lush part of the country. A four hour drive east to the coast showed many functional ecosystems, along with the thriving agricultural state. Seeing these scenes as an outsider changed my perspective - it was certainly the first time I wasn't immediately angry upon encountering a tractor pulling hay down the road I grew up on (moving around 5mph down a 55mph windy country road).

I started to think about the people's link to the land, because in areas it is still strong and apparent there. Highways in NC are very rarely bordered by concrete or pavement, most medians and virtually all roads are bounded by broad vegetated ditches - the very same phenomena I now study from my New York architecture office as sustainable design implementations for stormwater called 'bioswales'. I find it a pity that common sense didn't out-sway land greed to lead the planners of most American cities to retain a bit of green space for natural drainage.

Sustainability happens in places like North Carolina in this way - it's a matter of common sense rather than science. I remember my step father building a roof over our west facing porch to shade the facade until the trees filled in. He took great care to plant trees specifically across the east and west facades - my step father did not need 6 years of college education to talk about sun shading and solar heat gain.

My best friend growing up there lived beside of her grandfather, who had moved down from the coal country hills of West Virginia. He would burn their trash regularly in metal barrels rather than hauling it to the landfill. This always seemed an odd practice growing up, but looking back I realize that I still have yet to meet a family that takes more care in recycling and the separation of trash. The concept of taking care of waste locally lead them to meticulously sorting items as well as composting food waste for their garden.

Despite NC's current status towards the bottom of the environmentally thoughtful states in this country, I find some hope in the small practices that persist there. I still met people of various education levels who have an understanding of the natural beauty much of the state possesses, and a sense of heritage towards it. I heard few concerned conversations about the environment, but plenty about the cost of fuel. Overgrown fields in areas previously over-manicured show a start for dealing with and consideration of the rising oil prices. Hopefully North Carolina won't forget its traditions and relationship to the land and manage instead to sustain and preserve itself.
Posted by Melissa Anna Murphy at 5:16 PM 2 comments:

Barcelona has an amazing network of bike lanes, promenades, and automobile infrastructure. They are clearly dealing with a high volume of car traffic, but it looks like popularity of biking, and implements such as separated lanes and point to point commuter bike rentals are spreading quickly through the city. 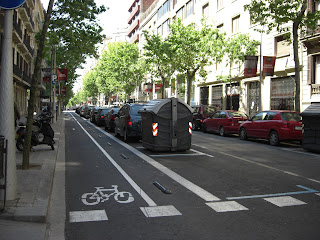 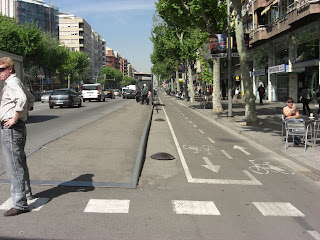 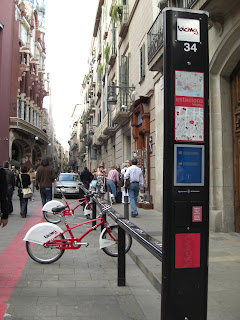 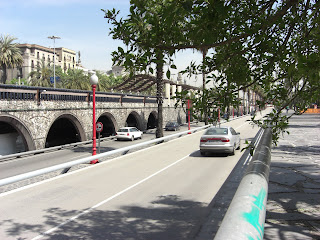 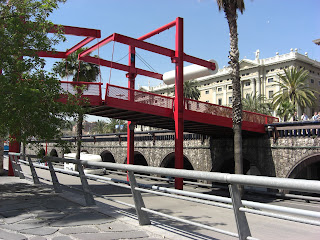 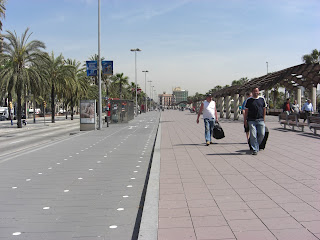 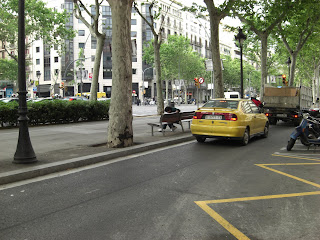 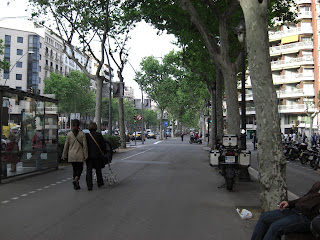 Posted by Melissa Anna Murphy at 8:41 PM No comments:

In southern Spain, the dry and warm climate is alleviated in developed areas by centuries of water management legacy. The Arabic influence brings much of these water focused implementations to the surface as aesthetic elements and it was wonderful to see both old and new takes on the ideas throughout Granada, Cordoba, and particularly in the 10th Century Moorish Alcazaba complex of Almeria. The images of water and fountains have loaded religious significance, but also work environmentally to aid the air quality (and perceived environment) by cooling and providing additional moisture to the air. 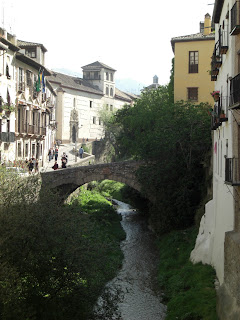 The areas around natural waterways in Andalusia were always bounded by particularly lush strips of green, standing out in contrast to the abundance of stone and gray sandy soils. 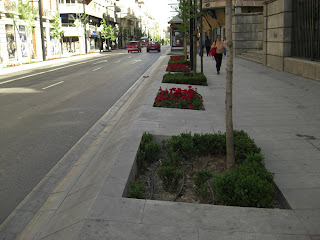 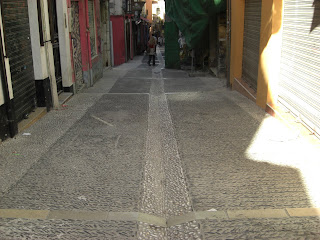 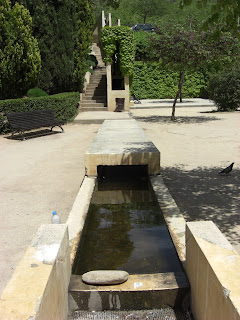 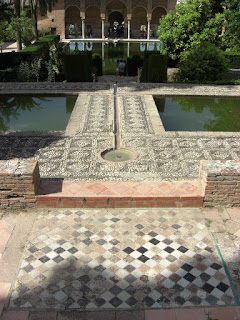 Of course, then there is the Alhambra - at various levels of restoration/preservation. 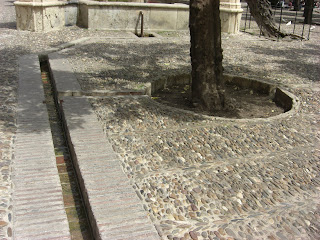 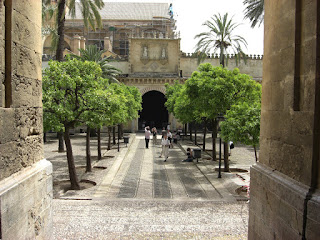 The plaza in front of Cordoba's Mezquita seems to have integrated some type of irrigation/drainage overflow system for the treepits. 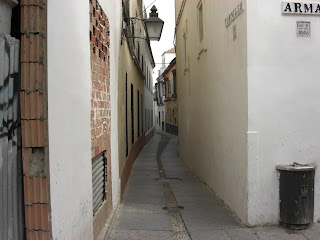 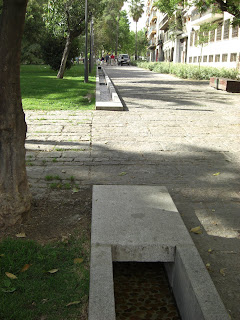 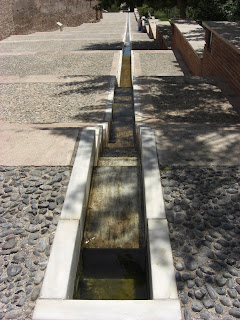 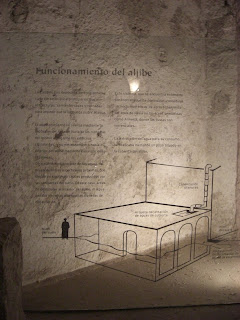 A series of long channels run through Almeria's Alcazaba, often with a fountain at the lowest point. The complex had various information about the Moorish systems of storing water in cisterns. 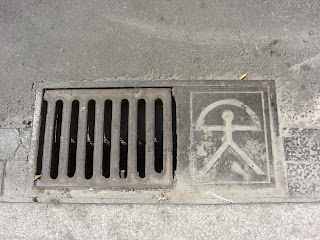 Most of Almeria is not as quaint as Granada or Cordoba in their modern water infrastructure, but their town symbol appears on sewer grates. 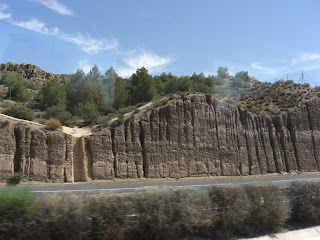 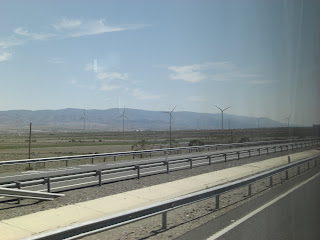 Along highways, I saw many of these built masonry channels in the sides of embankments, directing water run off which has been naturally eroding through the stone walls. A concrete culvert in the median and several other pieces in the landscape by fields make me curious if the area farms are able to collect the run off water to aid in the olive, onion, and wheat farming that abounds. (On a side note, amidst the deeply agricultural parts of Andalusia, we passed an impressively large alternative energy production area between Granada and Almeria, complete with acres of large wind turbines and acres upon acres of solar arrays under installation.)
Posted by Melissa Anna Murphy at 1:55 PM 2 comments: 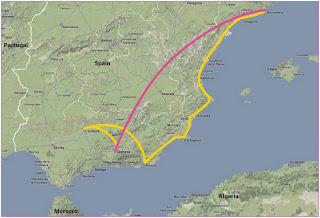 Our second night in Spain was spent on a train between Barcelona and Granada. I woke up just before dawn, somewhere in the middle of rolling hills (I believe just north of the Sierra Morena) to an amazing landscape formed from scattered tree silhouettes in front of a glowing deep blue sky. It was a disorienting experience, as the last daylit views from my window the night before had shown seemingly endless populated coastal suburbs of Barcelona. I have always been impressed by how train travel connects drastically different snapshots of a place, reinforcing how much there is between destinations that we don't always see.


The pictures I have don't do justice (between the low light, speed of the train, and the three layers of tinted glass), but that morning I saw the likely inspiration behind Dali's surrealist landscapes. Between this and the progression into the mountains it made the most beautiful sunrise I've encountered. 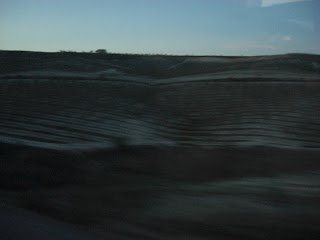 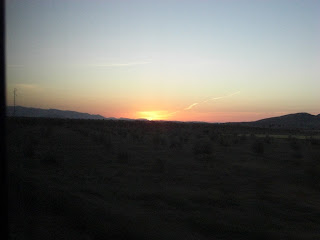 Posted by Melissa Anna Murphy at 5:41 PM No comments:

Between a somewhat hectic itinerary, gorgeous daytime weather, and a general lack of reliable (/free) internet connections I have managed to pass my entire trip to Spain without blogging. In absence of writing, I have jotted notes and taken copious photos - much of which I hope to organize and share in the coming days.

Reflecting on the whole trip during the journey home today I came up with a broader theme that may best collect my random observations during the trip - that being the relationship between transportation, travel, and resulting perspective of a place. There is a very pointed realization in this that one's experience of a place changes per the speed, proximity, and the scale at which you view it. Multiple readings of any place exist and a variety compounded can paint possibly endless numbers of accounts of one locale.

I'll attempt more detail with this later - but for now, the overview of my trip follows. There is the blurry vast experience of Spain upon arriving and departing by plane. The spotted experience of the trip south through Spain from Barcelona to Granada by train, contrasting with an extensive trip back up the coast by bus. Shorter journeys through agricultural Andalusia by direct buses and finally various readings of Barcelona (as well as Granada, Cordoba, and Almeria) from bus/taxi/foot travel.

Having taken different routes between like points on the various legs of this trip, I notice each having left very different impressions.

More to follow when jet lag wears off.
Posted by Melissa Anna Murphy at 5:15 PM No comments: