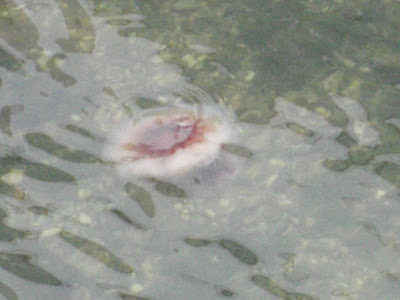 Who knew? We saw no less than 8 floating (and alive!) near the shore between the Maritime Building and the Staten Island Ferry..
Posted by Melissa Anna Murphy at 7:11 PM 1 comment:

Briefly back to architecture and the infrastructure of a building - David Byrne has taken over part of the Battery Maritime Building, converting a space into a music hall that is an instrument of itself. I was a little underwhelmed with the actual product - after reading reviews about the conversion of the building's existing systems into this 'organ', I would like to have seen less modification to the space, but the building and resulting environment was pretty impressive. 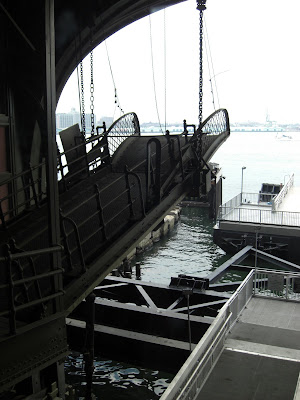 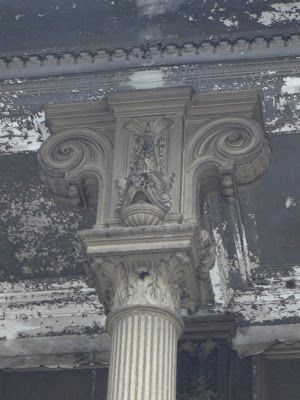 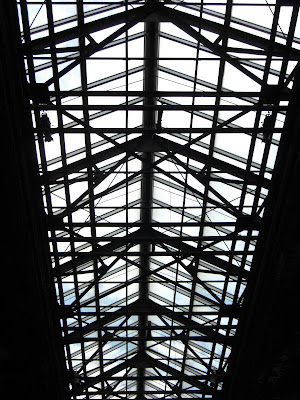 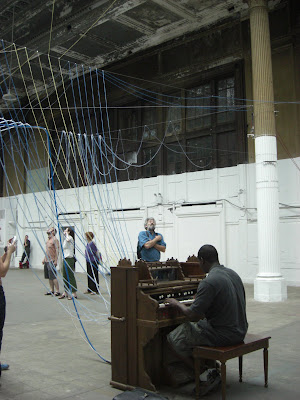 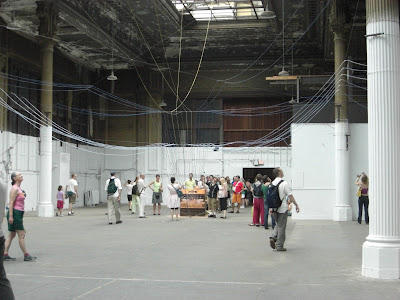 Posted by Melissa Anna Murphy at 7:02 PM No comments:

I finally made it out to Governor's Island this weekend, after being completely inspired by seeing the presentation Adriaan Geuze made months ago - starting it off by riding a bicycle into the lecture hall. The threat of rain prevented a long bike ride around the island, but a leisurely walk through showed the beginnings of this island's life as a public center for recreation and sustainability education. 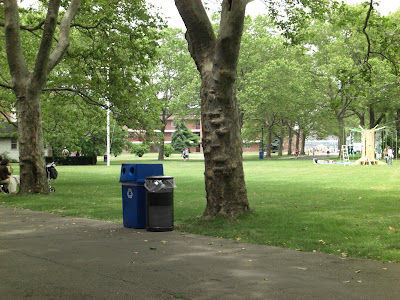 Every trash can in Governor's Island was flanked by a recyling bin - a sight seldom seen in New York. 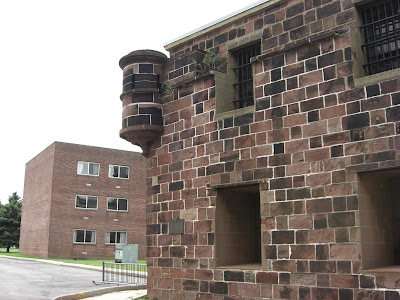 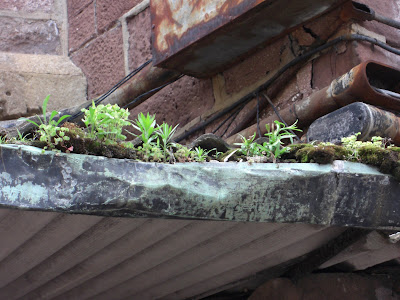 Armory building turned prision is now turning.. into an unlikely home for vegetation. 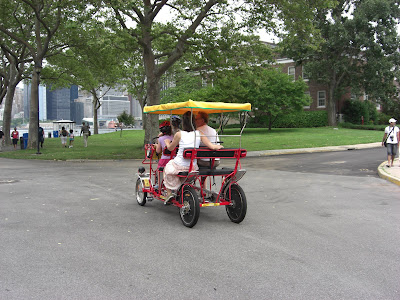 A bicycle rental program has been established and these four person bike 'surreys' seem to be convincing many families to pedal rather than drive (it helps that most of the island is car-free at the moment). 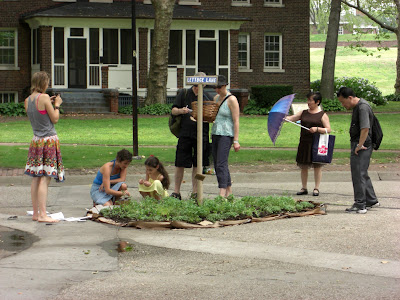 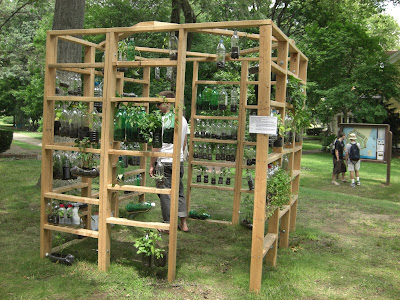 A completely volunteer run art fair was going on, many exhibitions of which were geared to teach children about sustainbility. Children could learn to garden in the middle of the street 'Lettuce Lane' or add to insulating the wooden structure with reused, planted plastic bottles. The structure will eventually be completely enclosed with these hanging terrariums. 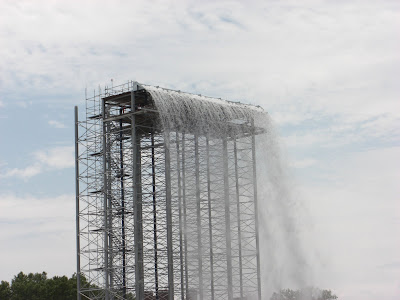 Olafur Eliasson's four waterfalls were visible from the ferry, and this one at Governor's Island itself. The jury is still out on whether these pieces are wasting energy and materials in the name of art, or if the recycling of rain/river water and creating current is truly helpful to the ecosystem of the East River, but there is something to be said for publicly accessible art. 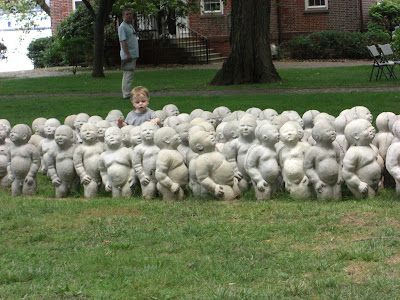 Speaking of publicly accessible art... This was priceless.
Posted by Melissa Anna Murphy at 6:33 PM No comments: 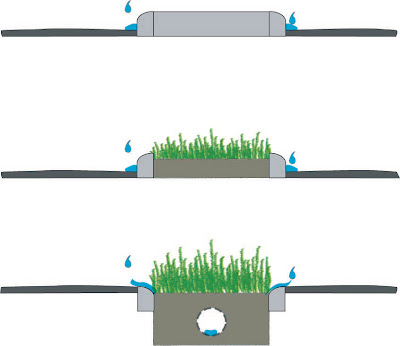 My life takes place amidst a world of hard surfaces. Masonry building meets concrete sidewalk meets asphalt street. Steel grates and concrete tunnels direct water in routes that must transverse windy miles underground before arriving at a treatment facility, and perhaps eventually rejoining the river - the only natural part of the water system remaining here. Trees are suffocated in tree pits, where poor maintenance pairs with an aggressive environment to drive out all but the heartiest of species. There is an utter lack of connection to what lies beneath the urban surfaces - I couldn't tell you the natural color or quality of the soil in New York - but somehow, once in a while nature finds its way through the cracks and 'thrives'. Thrives at least until acted upon in the name of 'maintenance' - some of this was first brought to my attention when I saw my Super scraping vegetation from expansion joints in front of my building, no doubt part of some local law requiring it to preserve the concrete. I wonder how different the city would be if we made the attempt to preserve the vegetation and the (somehow active) ecosystem it represents and spared the energies wasted with pavement. 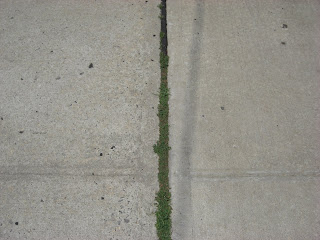 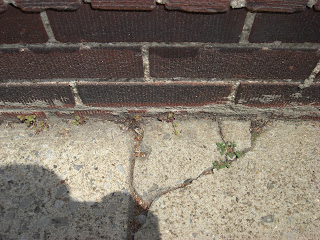 Sometimes the weeds seem to have a mission of their own... 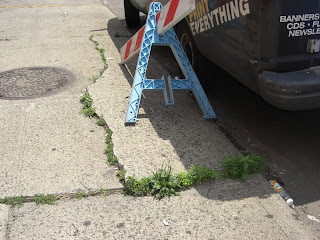 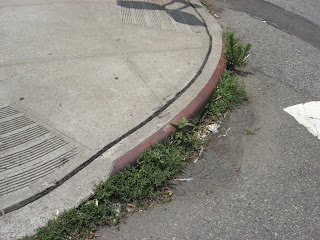 In Red Hook, Brooklyn someone is trying hard to make room for vegetation... 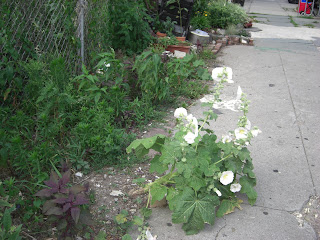 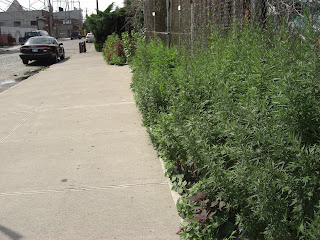 Travelling by bus up to Boston this past weekend, I was lead again to think about travel and the infrastructure surrounding transportation. I've always been fascinated with the idea of roads as long lines connecting destinations with a multitude of various options. It is impressive to me that you can possibly get between most any two points on one body of land without leaving a continuous strip of planned pavement. I find it so interesting to identify with a road or piece of highway on an every day, local level and then expand your perspective of it as you travel distances into other neighborhoods or states, witnessing changes of the highway's surroundings.

I attended a wedding reception located on the 16th floor of a building upstream and across the Charles River from Boston. The view was truly spectacular and no one had been aware before that a public place with this view existed, although for many years I would bring visitors to the same (Cambridge) side of the river to look back on Boston from esplanade level.

The bus ride back through Connecticut encountered the crossing of several other rivers and I began thinking about the relationship between place, street, and river. I realized that I know sections of rivers in relation to the city that was founded on them. There is the Charles River I associate first with Boston, the Hudson I associate first with Manhattan, and then some small towns like Beacon that I've stopped on. Not being a boater, it's more difficult for me to see the larger context of the river as a linear element connecting places. The bus crossed a broad river opening just south of Stamford, which I've crossed plenty of times on the same route, but it occured to me just today that it may very well originate around the same area as the Hudson, which I'm so much more familiar with.

I realize that I am typically viewing rivers from this 90 degree angle, either crossing them or standing at a bank - rarely getting a longer picture than a typical cone of vision. It seems ironic that I can know and understand the places founded on the banks of a river without understanding or knowing the river. The rivers have been here so much longer than the cities, and were at some point, the primary means of discovering places (and later of transportation and shipping). In the time of the Europeans exploring the Hudson, it was not the river that runs by New York, but instead it was a route banked by the wild and the unknown. I realize that it's not so long ago that it was the river that connected mapped points over long distances, not a man made highway.

Posted by Melissa Anna Murphy at 6:31 PM No comments: