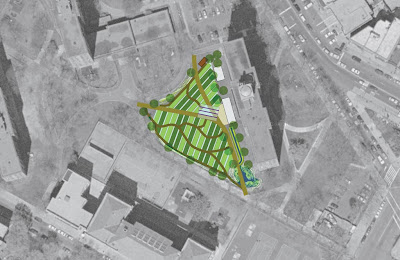 Just reflecting/thinking publicly after today's charette for the Grant Houses Community Gardens at Columbia.. Hopefully I will find more time to develop this a bit further..
Posted by Melissa Anna Murphy at 8:55 PM No comments:

As I begin orchestrating a move after two years of living in Long Island City, I want to dedicate a bit of blog time to the ever-changing neighborhood which more and more residents are attempting to make a home of. I have long held mixed feelings about the developments going on along the river, but the focus today is on a recent one, nearly complete in construction which has broken any sense of order in the urban fabric that the previous towers have attempted to abide by. My street now ends in a 10' tall metal fence.

Ironically, the name of the offending development is The View (http://www.queenswest.com/maps/condos_coops/rockrose-condos), and it first caught my attention in early stages of construction when it's massing slowly grew to block a formerly direct and framed view of the United Nations building across the East river from my street (46th Road). It was these lines of sight directly back to Manhattan which had originally attracted me to the still fairly industrial community. 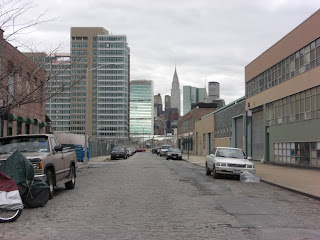 Other towers growing along the coast in the past 15 or so years all managed to abide by some sense of urbanism. The other buildings are oriented so their wide facades face the North and the South, intelligent for maximizing daylight and minimizing heat gain in this climate. Urbanistically, this creates less major shadows on the existing neighborhood, view corridors are preserved, sidewalks at street level remain defined with commercial use where feasible, and open space is left along the water, where it enhances the Gantry Park and will someday be connected north and south to a system of East River coast park spaces from Brooklyn up to the Queensboro Bridge and beyond.

Some shots of maintained view corridors to Manhattan with the previous developments: 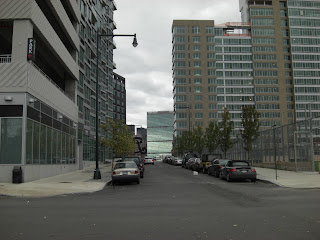 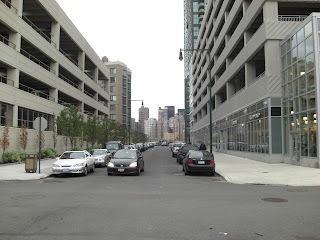 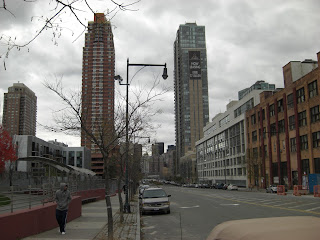 "The View", however demonstrates a departure from all of these basic principles. The building is massive, with the bulk of exposure being East and West to maximize views with no obvious concern for shadowing excessive parts of the neighborhood, or internally saving energy which will be required to maintain comfortable temperatures in the predominantly glass housing units. The site planning around the building is even more unfortunate, as a baseball field has been built directly east of the building, where it extends beyond the street grid, forcing 46th Road to end premature of the water and abruptly with a tall fence.

Living in an urban area, and having programmed baseball fields into dense residential greenways, I understand the both the need for such sport facilities and the challenge of finding the space for such, but the siting here is preposterous for several reasons. First, the field will be completely in the shadow of the adjacent buildings for most of the day (particularly after the construction site across the street is also developed). The siting and size destroys the urban fabric by not conforming to the established street grid, leaving the future development of 46th Road to loading and manufacturing rather than encouraging further small scale residential and commercial when the current industrial uses run their course. The fence along the field makes an unwelcoming edge which breaks down the continuation of 5th Street which will be an important corridor when the coast continues development north towards the Silver Cup site at the 59th Street Bridge. The lack of windowed facades facing this portion of the street cause it to feel unsafe in the evenings for pedestrians despite it's proximity (1 block north) to the newly opened residential amenities of a grocery store and pharmacy. 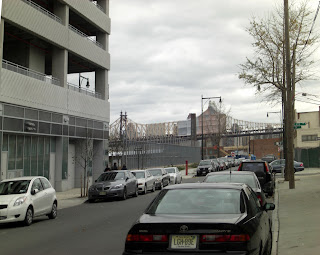 I find it entirely unfortunate that the siting for this development was not better though through. The land was clearly already owned, and a simple siting switch of building and field space could have allowed the community east of this building to continue to grow productively, and given the field to the coastal park, where it could be more of an open and public amenity, rather than a gated intrusion destroying public access to the river and blocking the view which reminds residents of Long Island City's best feature - its proximity to Manhattan.

This development re-emphasizes 46th Road as an edge, the end of residential Long Island City. North of 46th Road, even Vernon Boulevard becomes sparse and inconsistent. A great opportunity to reconnect the old neighborhood with the new has been missed, and with such planning practices as employed at "The View", it seems that the outlying areas will remain neglected - the backs of new development turned upon them and the broad sides of new massing blocking visual connections to Manhattan. 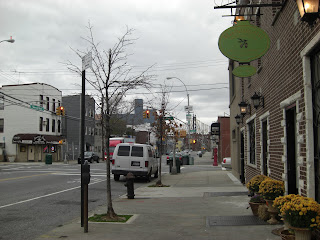 The last new commercial effort on Vernon Blvd. before 46th Road, beyond which taxi repair facilities and industrial warehouses take over amongst scattered residential.
Posted by Melissa Anna Murphy at 11:02 AM No comments: