As promised, some visual documentation attempting to demonstrate open land rights in Trondheim. 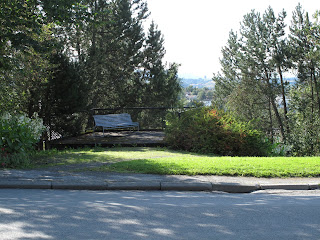 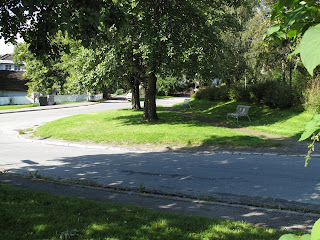 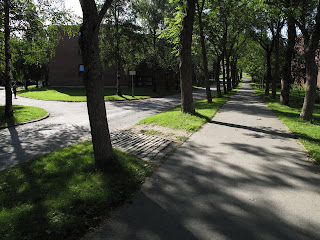 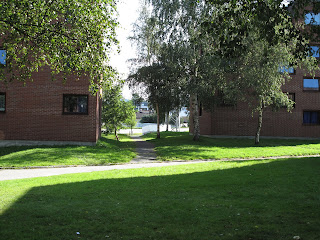 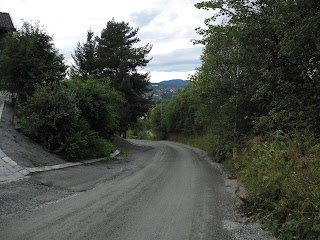 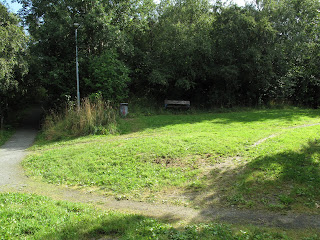 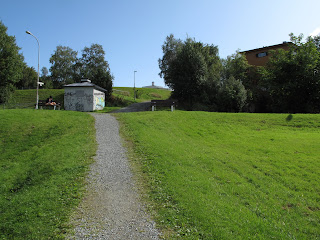 And finally, a view from one of these benches. 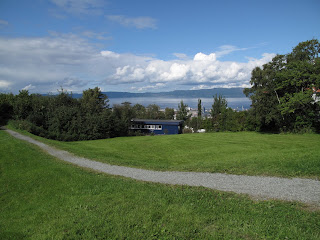 Posted by Melissa Anna Murphy at 5:25 AM No comments:

The past few weeks in Norway, I've been continually aware of the lack of 'boundaries' in the Trondheim landscape. Street becomes sidewalk becomes drainage swale becomes a yard or a field of a farm. Sometimes the 'road' is no more than a gravel driveway or wide dirt path commonly used publicly by bikers and pedestrians alike - though you may be walking through a residential community, there is no concept of 'insiders' on these streets. Sure, some houses enclose their yards in hedges, but for the most part a neighbor could pass into the adjacent property lot with no clear marker and a pedestrian on the street could easily use what in the US would be perceived as a person's yard as a shortcut.
I had chalked most of this up to the small scale of Trondheim paired with low crime rates and a generally casual attitude of Norwegians, but the unclear separation of public and private outdoor space kept appearing. Along intersections and on random roadside (or pathside) hills I keep finding benches. They are placed so casually that anyone may stumble upon them to sit and ponder the landscape (the topography here ensures that there is always a view), but they are not consistent enough to be part of a public citywide 'parks' space.
I'll have to come back to this with some photographs another day, but a couple of lectures from classes this week have begun to shed some light on the phenomena I've been noticing. In Norway (and much of Scandinavia), there is a national law known as 'Allemannsretten' or 'every man's right'. It can also be called the Open Air Act or Freedom to Roam. In short, it allows every person of the general public equal rights to access most land - publicly or privately owned. Many travellers know of this because it's common knowledge that one can camp freely through most of Scandinavia, but I am still learning the details and extent of this law. http://en.wikipedia.org/wiki/Freedom_to_roam
Comparing Allemannsretten with what I have heard of land tenure battles in East Africa, or even with the traditional American fenced-in yard (or gated community!) that I know too well, I am becoming very intrigued as to the societal implications of this law (and practice). Remembering that my least favorite thing in Queens was the abundance of chain-link fence and property walls that serve little purpose than to receive graffiti, I imagine that a different frame of thought on land rights and ownership could seriously change an urban sidewalkscape for the better.
I am hoping to find yet another perspective on land rights when in Nepal in a few weeks. I hope to keep the line of thought in mind and see what parallels can be found between land ownership, societal norms/land use, and how the sense of citizen's responsibility to the land varies. At the moment I hypothesize that the concept of having rights and ownership to all the nation's land (shared with your compatriots) makes the society more personally responsible to the land and their environment. Perhaps knocking down a few fences could breed environmental stewardship.
For now, I'll go climb the unclaimed hill down the street to sit on its bench and read for a bit in the few hours of twilight left before the 11pm sunset.
Posted by Melissa Anna Murphy at 10:44 AM 1 comment:

I need to get to a library and find some more information on the local plants, but the selection of roadside weeds has made quite the impression on me. Just thought I'd share some pictures here. 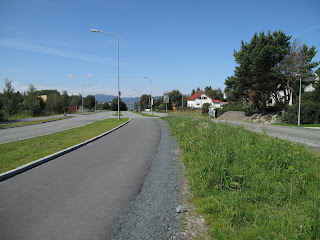 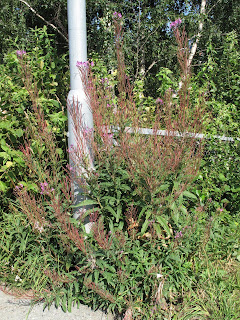 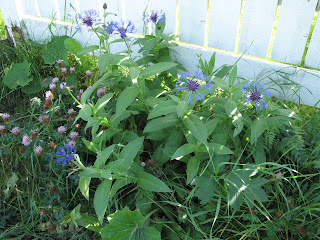 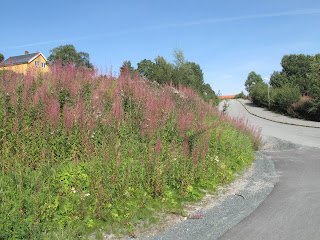 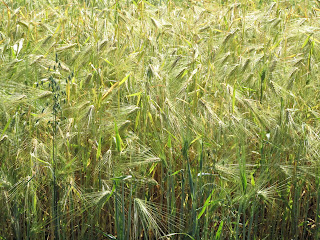 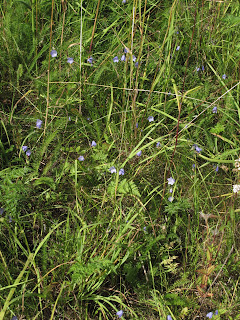 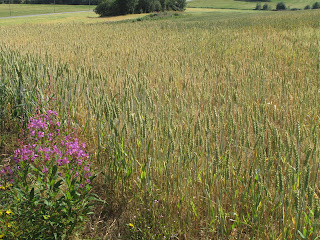 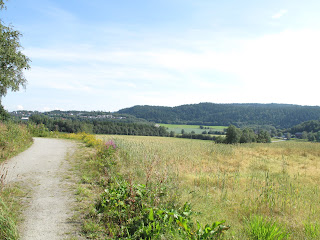 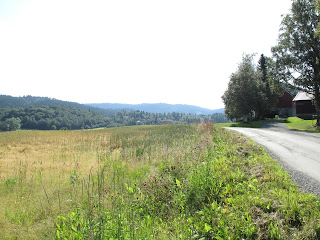 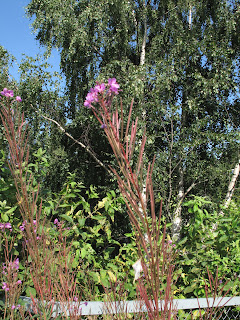 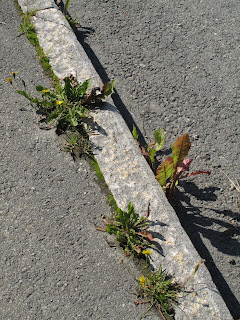 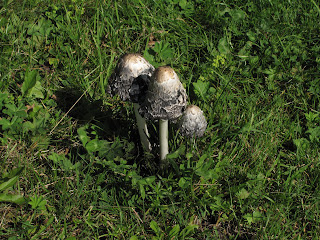 Since arriving in Norway a week ago, many thoughts have come to mind, but few have developed far enough to serve an entire blog entry quite yet. For now, I have been thinking a lot about people - and the concept of culture and language as social infrastructure. I'll start with my first impressions of Norway provided by my first perceptions of Norwegians.
I believe that there should be a word in our language (or all languages) for the way a society presents itself in public - not just physical appearance, but something that encompasses cultural nuances such as eye contact, acknowledgment of others, body language, friendly or shy postures, etc. I cannot think of a good term to take all of this into account, but I hope someday to find some sociologists who can describe it better.
So with or without a good vocabulary for the phenomena/cultural norm, 'meeting' Norwegians on the street has presented a paradox in comparision to the personal exchanges I have found thus far. In public, Norway's "street face" reminds me of New York - people here are likewise inwardly focused and show little to no reaction to the strangers around them. It struck me as odd because this is Trondheim - a small town of 160,000 people with little crime and no reason to fear each other. What is more is that the weather has been quite beautiful, but the attitude of the people still reminds me of New York in the winter - when the cold weather and drear forces people to concentrate inwardly and be even more detached from their surroundings. I think back to where I grew up in North Carolina where even in the very antisocial setting of remote 'neighbors' passing each other in their cars it is customary to wave or nod. While Trondheim is not so rural and pedestrians abound, the scale of the city and the great amount of greenspace would have lead me to expect to encounter more nods, smiles, or waves between people.
None of this is to say that Norwegians are a cold people. Many self acknowledge their country's introverted nature when it comes to meeting strangers (strangers being other Norwegians or internationals alike). It has been my experience over the past week that once you approach any Norwegian with a question or to start a conversation, their reaction is incredibly warm, friendly and helpful. This is quite the opposite from New York, when you sometimes are lucky to find a response when asking for help from someone on the street.
My position in a very international student setting has brought another layer of contrast to the Norwegian behaviour visible down the hill in the city. It seems that the incredible mix of cultures truly works against the individual cultural norms that each holds, and the resultant becomes an overall solidarity that is most friendly and outgoing. Granted, with any of this there are deviations to be found across the board, but I am quickly finding that if someone smiles or nods along a sidewalk here, then they too are an international (likely student) and even the very subtle acknowledgement reinforces the similarity of our positions in this place.
Posted by Melissa Anna Murphy at 5:37 AM 1 comment: 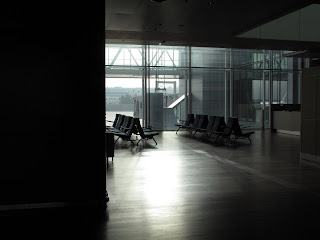 My flight arrived in Stockholm today under weather conditions the pilot casually mentioned as a fog bank with no visibility. Assuming 'no visibility' to imply miles outward, on the scale of the plane, I was rather surprised to see nothing but whiteness outside my window and in the plane's pilot-view onscreen video right up until just a few seconds before touching ground. I believe at 7am this morning, visibility in Stockholm might have been measured at about 15'-0".
The fog was dense but bright - white instead of the gloomy gray that I've always associated with Scandinavia (thinking Hamlet and, "there's something rotten in the state of Danemark"). The atmosphere felt very fitting and more than a little illustrative of my state of mind at the time. I could only think of how little I actually know of the culture and language that I am about to immerse myself in.
It was reassuring to be on the ground in the Stockholm airport though. Seeing how well the Scandinavians contrast materials and play with diffused light to create warm spaces despite sometimes bleak overhead was incredibly comforting. Between this and the lush greenery I've already experienced between Sweden and Norway, I am quickly realizing that Scandinavia is a place that feels good - bright and optimistic - even when elements typically characterizing drear perservere. Plus, the fog had lifted completely by the time my 9am connection took off to Trondheim. 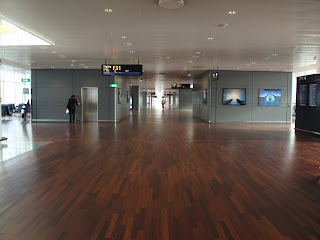 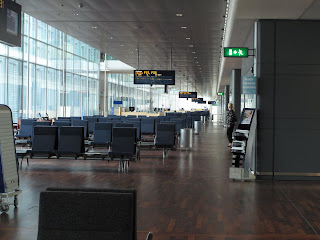 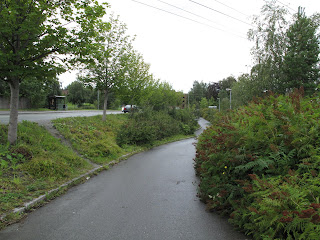 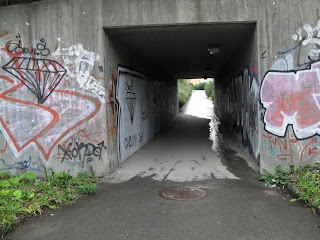