Over an hours drive from the nearest city, about 5 kilometers on a windy uphill path from the highway and across a couple rivers in Nordland lie a series of farms which were established in the 1830s. Making the hike up from the E6, on what is now a series of decently marked paths in part of Friluftsliv (or outdoor, literally 'free air <=leisure> life') tourism, makes one wonder how and why these farms were ever founded and maintained up until the 1970s. 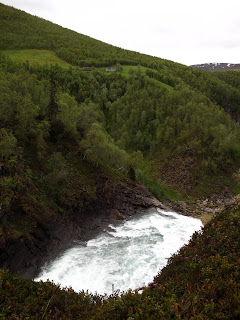 (Bredek farm is top, center in the distance)

The answer turned out to be fairly simple - at the time, the farmland in the valley served by roads was running short, so farmers were forced upland and into remote areas to establish fields and grazing pastures. Along with this, I can only imagine, came a heavily work-ridden life removed from society around. The alternative option or next step in this migration turned out to be the expensive and arduous move to America where accessible, flat land was still plentiful. 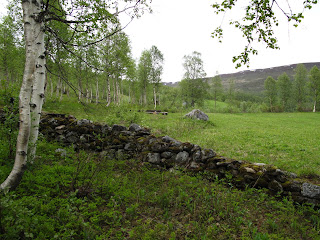 Above is one of the first fields found on approach to Bredek. The stone wall is as old as the cultivation - having been built from the rock found when clearing the land. The full farm follows, with much of the older equipment still intact - from wooden sickles to steel wood stoves which must have been hauled to the site. The farm's environment and site is exquisite in nature with the views to the mountains, shelter from strong winds, natural water sources and constant reassuring sounds of a nearby waterfall and the woods full of birds and wildlife. 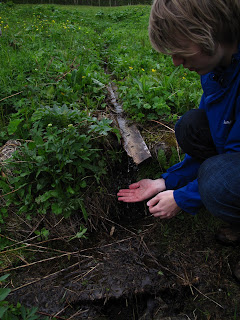 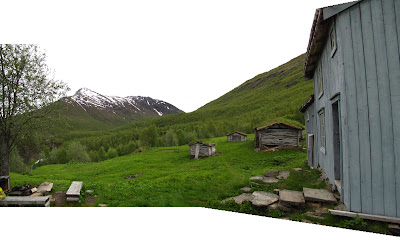 Two-thirds of the way back, spotting the highway and railroad infrastructure below, the remoteness really sank in. 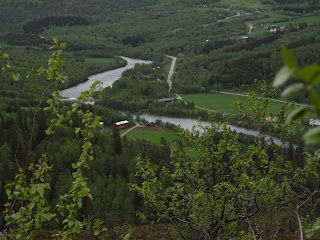 The concept of living off the land, and the very real proof that this earth does not hold the capacity for everyone to do just that today. The need for cities and densities becomes clear, but how do we reconcile this with man's desire for space and yearning for natural surroundings. My very presence in this place seems to bring the story full circle without quite answering any of the questions. Settlers moved from Europe to the New World for land and opportunities, built cities far removed from farming sensibilities and nature, and bred a generation of assorted urbanites - some of whom, like myself, now seek a break from the stifling city life to better reflect on its problems only to find that perhaps we simply end up back where we started.

Posted by Melissa Anna Murphy at 7:32 AM No comments:

A trip and several hiking tours up north have had me thinking a lot about wilderness - those natural areas still untouched by man, and how such a landscape transforms slowly over time once we drag our infrastructural entourage through an area. It seems fairly evident how humans change nature when we tread over it, but I also wonder how it changes us. I find more and more of my observances here in Norway certainly reflect some societal practices that have been created and or adapted over time as an effect of the local natural world. My next few posts will delve into this theme of man vs. nature (or is it man in nature, or nature around man, or just nature alone?).
One of the introductions that many foreigners get to Norwegian culture is a saying: "There is no such thing as bad weather, just bad clothing." While one might laugh it away the first couple times they hear it touted, there is definitely something to it. I'm not sure that I've been anywhere else in the world where a cold, rainy day would be so quickly deemed appropriate for a long hike, yet here I find myself again and again encouraged to layer up and head outside despite (or perhaps in spite of) the weather.
All fashion morals aside, last week I donned a full (borrowed) rain outfit for a leisurely stroll in some hills around the Rana and Saltfjellet areas. While the look isn't one I would have tried out in New York, here it works - in the least saving one from cooping themselves up inside for weeks in the name of bad weather. 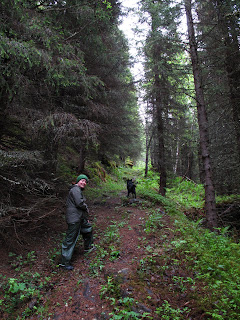 Hiking comfortably in the rain also makes it possible to experience some ecologies that go unseen on dryer days. 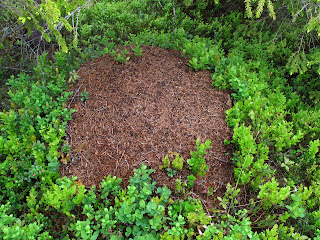 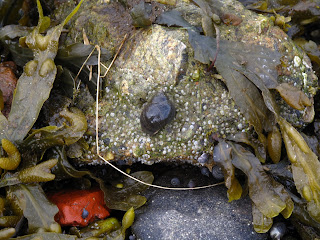 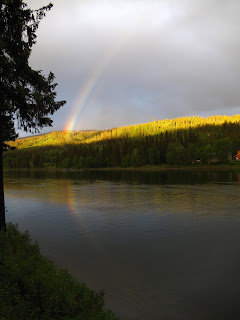 rainbow
Posted by Melissa Anna Murphy at 10:56 AM No comments: