A Landscape of Grief

Last Friday, when I first saw images published by Aftenposten such as the one above, one of my early thoughts after the horror passed was the irony of the bollards at this site. Having worked on various security landscape projects, I've held an amount of skepticism to the overwhelming number of bollards planted in the world, particularly in the past decade. Engineers tell us that these steel and metal forms can stop a vehicle carrying explosives in the event of a terror attack, keeping blasts from damaging the structural components of a building.

Seeing the aftermath of a car-borne blast outside the bollard zone here makes me question how much these stanchions actually help. While the building has not fallen down, it seems unlikely that it will be ever occupied in this form again. Further, rumors of possible structural instability have been circulated in the news, explaining added difficulty to the search and rescue process - so what actually have the bollards in all their perimeter multitude accomplished?

I ask this question more so now, after visiting the area surrounding the bombed site the other day. I took this photo of what seems to be new bollards going into place, effectively blocking the road to the targeted government building. 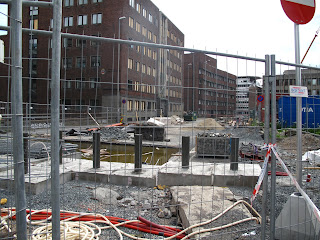 Perhaps these new bollards signal a new strategy in keeping vehicles off the route to important buildings and disallowing parking on such streets. In fact, in the aftermath of these attacks, a great many streets in Oslo have been closed to traffic while investigation, demolition, and reconstruction take place. It may now be a good time for the city to look at the benefits of pedestrian streets from a newly relevant angle and reconsider the auto-driven habits that clog city streets with parking.

Interestingly, in the new experience of the city, I find these blockages not to reinforce a landscape of terror and fear, as they well could. The barriers are lightweight and transparent, seeming (much like the law system in Norway) more suggestive rather than prohibitive or restrictive. Rather than people attempting to bypass these barriers, they have not only been respected as limits but have also been turned into memorials by the people. What could easily be an oppressive sign of fear another place, here has been transformed into a beautiful sign of grief and unity. 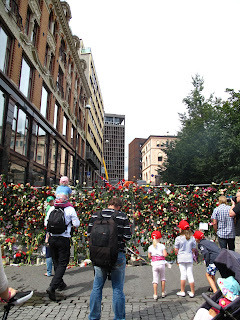 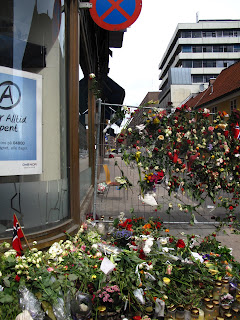 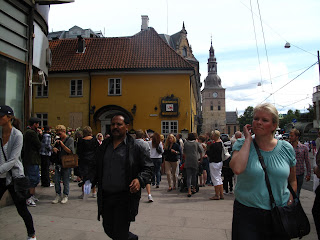 I've written a more personal note to this event in my second blog here, so I will keep this commentary short. However, from an urban perspective, experiencing this event has noted the transformation of a city in grief. These gates to the destroyed areas have becomes nodes in the city collecting people. Construction staging has created extra pedestrian streets and an open view feeling to the process of reconstruction. Destruction in some areas is being memorialized. Small statues, steps, and gates throughout the city bear flowers in mourning and remind passersby that we are all together in facing this tragedy. 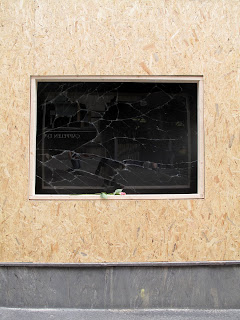 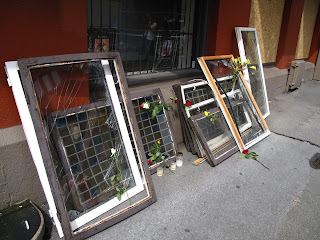 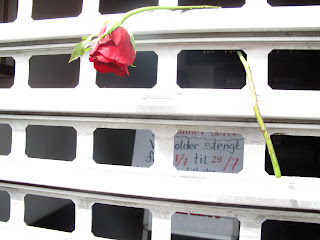 Posted by Melissa Anna Murphy at 2:49 AM No comments:

Deconstructivism at its (natural) best. This landscape is around the mountain peak Melfjellet in Nordland - an iron rich area of sedimentary rock. As the pictures (from June) note, the area is under snow cover much of the year, with the main traffic artery left unplowed through winter, accessible by only skiers and snowmobilers. The summer thaw reveals forms that could easily inspire or compete with the last decades in architectural deconstruction formal thought. 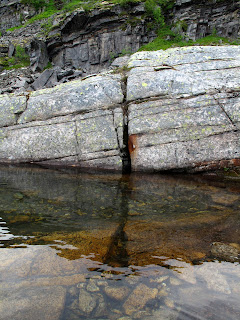 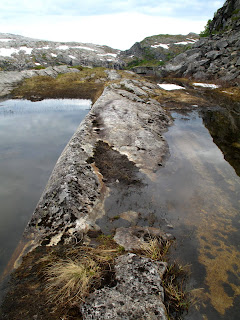 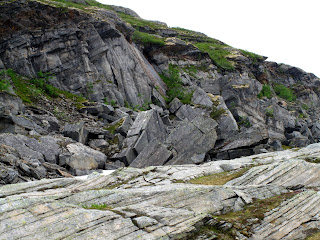 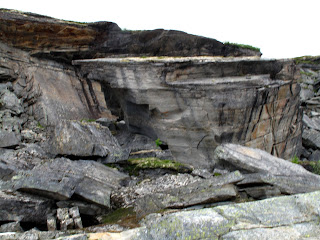 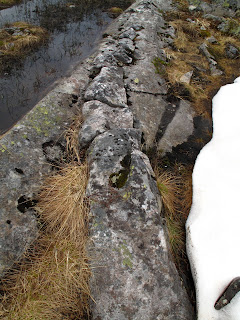 Posted by Melissa Anna Murphy at 2:26 AM No comments: