Manual Labor and its Implications 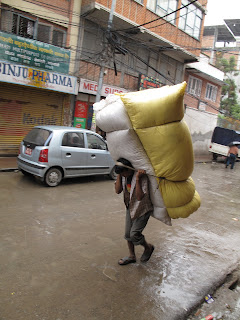 One of the most obvious, and often most shocking differences that a Westerner can observe regularly in the developing world is the large scale reliance on manual human labor. Having lived in Kathmandu for nearly two months, I have mostly gotten used to seeing single men carrying refrigerators and other similarly sized/weighted loads down the street on their backs using a strap around the forehead while taxis and rickshaws carrying tourists weave between and around them. When the road outside of my hotel was repaved, there were no large machine vehicles in sight – rather a simple metal cart driven by a small tractor engine, holding a mound of pitch inched its way down the street while two men with shovels quickly scooped and smoothed the asphalt over the surface.

It strikes me again and again that the world is an unfair place. To various extents depending where you go and who you ask, it is clear that Nepal is still a caste based society - issues of discrimination between people based on profession (which is traditionally tied to the family name) still occur. I hear rumors that different low castes in Nepal have been recently acquiring more power and better, more stable working conditions since the Maoist movement has formally entered the politically arena here. From the sounds of it, the Deola sweepers are now finding opportunity in municipal janitorial positions which hold pension benefits and job stability, much to the chagrin of the farmers who are traditionally a much higher caste and find their livelihoods to be full of hard, thankless work by comparison. Traditionally, laborers and those who dealt with refuse/waste found themselves at the bottom of the caste system and labeled Untouchables – capable of contaminating the food/lives of the upper castes despite the necessary roles they filled in the context of up-keeping the city.

Perhaps inspired somewhat by the political environment here, I have began reading through a small survey of Marx and Marx-inspired revolutionary communist (and communist criticism) literature. One can quickly see the ways that the ideas/ideals can be romanticized and become popular in a context such as Nepal – where life is hard and poorly appreciated workers are plenty. The sickle and hammer symbol is by far the most popular form of graffiti to be found through the countryside. 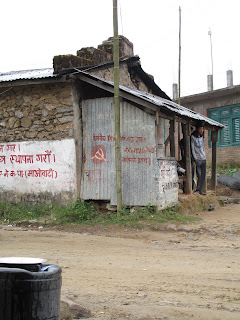 Due to the topography of the country, many rural parts of Nepal (and 80% of the national population is rural) truly rely on human labor for their basic needs. I went on a 7 day trek in the Annapurna Sanctuary where Gurung villages largely support themselves by farming and trekking tourism. The tricky part to this is that when your village lies four (long) walking days and 3200 meters above the end of closest vehicular road few crops can be grown and all supplies from rice to cooking and heating fuel must be carried on the back of a porter.

The experience of this, and being here in general, has given me some serious questions about sustainability and social equality. On one hand, it can be argued that human labor is completely sustainable – we have no particulate pollutants in our emissions, we are theoretically a renewable resource, and the limitations of human strength perhaps help to deter over consumption. The counter to this would need to involve some digging through numbers concerning the amount of calories that a porter needs to consume to complete his work, and trace this back to the increased load on farmers to support such laborers (moreso if said laborers are not vegetarian).

Further, judging human labor as sustainable begs the question of what increased health problems and loads on medical facilities and insurance programs. While trekking, I was greatly concerned with the strong fumes coming from fuel tanks carried on the backs of porters while passing on the trail – not only are these men carrying heavy loads quickly on steep terrain, but they are also subjected to fairly toxic fumes for hours at a time. (Ironically, the fuel is necessary primarily because of strict limits against cutting and burning wood which have been imposed on the villages by the National Conservation Trust.) What social capital is lost in a village where most of the men spend their days (and many nights) away from their homes and families for work and then are presumably susceptible to disease and early death?

Many of these questions and problems extend into the developed world as well, but manifest themselves in different (often more clearly less sustainable) professions. Such risky professions are the epitome of social inequality. Unfortunately, I realize that even the ideals of Communism do not cure these problems. There can be plenty of discussion regarding workers’ rights and ‘equality’ between the proletariat and bourgeois, but how does one handle the fact that the world’s society has ‘developed’ in such a way that some citizens somewhere have to perform work which is inherently unsafe, unhealthy and thereby, unequal?

Just wanted to reference back to the sub-focus of my current coursework: http://uep2009-kathmandu.blogspot.com/2009/09/sawal-bahal-children-caste-open-space.html
We've become heavily involved with a small primary school in our study area, and simultaneously will work towards helping a strong community group secure some (currently) private open land to build a playground. I'll be posting more on this in time.
Also, an interesting read related to nature and society:
http://scienceblogs.com/cortex/2009/10/nature_and_compassion.php
Posted by Melissa Anna Murphy at 5:05 AM No comments: 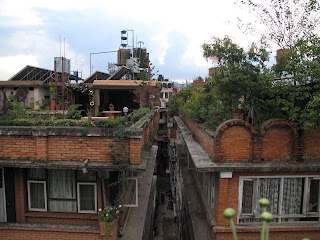 Kathmandu is a city so strangled by development and pressures related to the values of land (which near doubles every 3 years) that natural green space seldom exists. The Nepali people, however are from a rich ecological state and it quickly becomes obvious that city dwellers go out of their way to create some semblances of the natural world. Plastic flowers adorn even the poorest lobby spaces and real plants can be found in more elaborate locales. The rest of the natural will of the populous is forced upwards – to the roofscapes of buildings. Nearly all roof terraces and balconies show small and large attempts at the urban provision of trees, shrubs and even lawns.

At times, the efforts seem to be striving towards overcompensation – to the point that the placement and containers for plant specimens can become haphazard and seemingly circumstantial. Bath tubs, oil drums and discarded containers of many materials become planters. The goal of achieving vegetation takes priority over the aesthetics of the means through which it is accomplished. Nevertheless, these informal, private green projects serve an important function – providing some of the only options for (near) peaceful retreat from the noise, traffic, and dust of the city below. 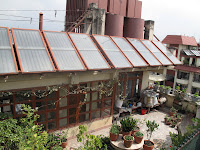 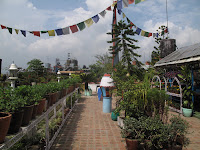 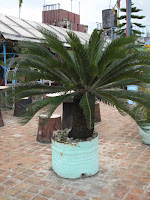 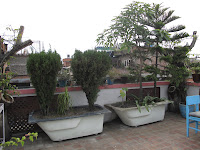 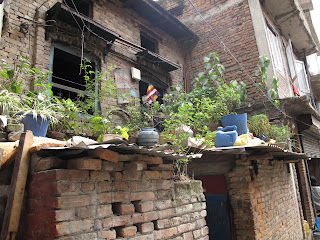 Posted by Melissa Anna Murphy at 4:39 AM No comments:

Posted by Melissa Anna Murphy at 5:35 AM No comments:

Where the Water Comes From..

Working with a moderately poor community in Kathmandu the past 3 weeks, one of our major questions has been wondering where the water supply comes from. They have plumbing infrastructure, but no water supply in this part of the city - instead tanker trucks bring water on a daily basis, filling up water tanks from which the community then distributes rations. I plan to post more on this later, when the picture is more clear - but this weekend my trek ended up at the beginning of the pipeline from which most of Kathmandu gets its water currently. It happens at an interesting point when a national park forest dissipates rather quickly into civilization and then to city.

Posted by Melissa Anna Murphy at 6:01 AM 2 comments:

It's hard to explain, or even to imagine the complete chaos that makes the roads of Kathmandu. Here are a couple of photos, someday I will post a video or two, but I believe that none of these can convey the motion, noise, and smells that come along with local travel through the city. It is a truly amazing experience to traverse, or especially to cross these streets, in general the largest and most agressive vehicle rules, pedestrians have no right of way ever, and it is beyond me, but somehow it all works without major catastrophies on a daily basis.
After acclimating myself to this environment, I cannot imagine ever again having any fears of riding bicycles in Manhattan. I think even New York taxi drivers would have a difficult time in Kathmandu.

Posted by Melissa Anna Murphy at 5:23 AM 2 comments: