Now that spring has arrived, my preoccupation has been in urban gardening. My own window sill is full of small-scale cultivation attempts which have finally also taken over a small portion of our fire balcony. I have been following a local initiative to encourage organic urban gardens and localized food production - MAJOBO (Mat og Jord der du Bor, or "Food and Earth where you Live"). Participants and enthusiasts in this group seem to agree in being more concerned about the health and nutrition of the land and production than the traditional aesthetic expected of the garden, as can be seen in various dialogues regarding weeds. These conversations generally follow a pattern:

Q - But how do you keep weeds away without chemicals?
A1 - They are only weeds if you don't want them - plenty of "weeds" are useful, edible, beautiful, etc.
A2 - Planting the right density of the right species will naturally inhibit unwanted growth.
A3 - Get in there and pull them out yourself!

The community and their knowledge is fascinating to me - it is great as a beginner in urban gardening to have such an accessible local resource base. Of course, as with most topics in urbanity, it is naive to assume that everyone in the hobby of gardening gets along. I have recently encountered a situation where the spirits of organic and guerrilla gardening are being challenged by a post-war structured flower bed mentality.


It all began in a Gamle Oslo housing cooperative whose lawn and land area are perhaps equal again to the building footprint. A long term resident has developed and nurtured a series of flower beds over her tenancy - each spring buying and transplanting flowers in bloom and weeding out any 'out of place' species to beautify the property. A few years ago, a friend of mine with an incredible passion for plants moved into the cooperative with her husband and asked permission to garden in an unused swath at the property's edge - between a fence and a row of hedges. With permission, she cleared the long swath, added edging and a retaining wall and began planting. Strawberries, arugula, peas, chives, and tomatos grew interspersed with some herbs and flower bulbs. The planting was dense, following a natural aesthetic and many of the species would take years to establish blooms. 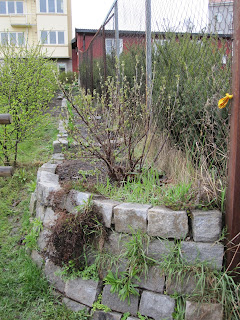 A couple growing seasons passed, then came an interference. My friend went out to survey the plot for this year's season and noticed several of her plants had been removed and some blooming flowers had been recently relocated into the bed. Beyond this, the chive stalks had been torn unevenly and the nozzle had been cut off of the garden hose. Conversation with the flower bed gardener uncovered an ongoing (and priorly passive) agression, complete with protests that my friend's garden swath was an eyesore and full of weeds. The other gardener admitted to moving and removing several plants, but it seems that responsibility for the hose and chive harvesting lay elsewhere - potentialy in a passerby. The most intact part of the garden remaining is pictured above with a currant bush, some wintered timian, and yes, a bit of actual weeding to be done.

These are the frustrations of urban gardening - beyond worrying about the plants, we have also to worry about all the other species around - especially fellow humans. While I had hoped to be introduced to this Gamle Oslo garden and see it as a potential pilot project that other property owners could learn from, I am instead introduced (yet again) to the complexities of dense cohabitation.

At this point there are a few potentials for this garden swath asides from neglecting it completely. Depending on how much the adjacent hedges now shade the land, some species may be introduced and the garden continued as before - with perhaps enough camoflage provided by the hedges to appease the neighbor gardener. It seems prudent if planting harvest-ables, that they should perhaps favor roots or vegetables that are more difficult to access. Another tempting idea is to cover the swath in a local type of nettle - which can be eaten similarly to spinach or made into tea - with the added benefit of discouraging meddling.

However, none of these options are particularly conducive to mitigating the neighbor relations. These types of opinion conflicts were quite prevalent in my thesis on communal urban spaces here and work to prevent change. As long as the concept of space personalization and aesthetic differences are at play, consensus and community are difficult goals to achieve. I find myself wondering if an introduction to permaculture would benefit the boards of such housing cooperatives or if the attitudes that support asphalt surfaces, expansive lawns, and weedkiller chemicals run too strongly for reason or change.
Posted by Melissa Anna Murphy at 3:07 AM 2 comments: